Ok, I’ll never complain about having to sing worship songs again!  And I mean it!

In my former job I constantly encountered people on the skeptical edge of non-belief.  I was a pastor at a church.  But I was a pastor specifically tasked with reaching the unconvinced among our weekend attenders.  And among this group of people a frequent, painful experience for them was “worship time”.

“OK, everyone, now is when we stare at words on a glowing screen with no house lights on and sing worship songs to God.”  Most skeptics and not-yet-convinced spiritual seekers loath this part of the Sunday morning experience.  One guy I know used to  synchronize his nicotine routine to coincide  (in liturgical precision) with the first worship set.

It isn’t just the smoker-seekers, though.  Lots of us Christians actually fake our enthusiasm for corporate worship.  Its because many of us don’t really get why we have to do it.  I became convinced of this last week – due to a sermon I was asked to preach by a friend at his church.  A sermon that may have just cured me.

This might convince you to NEVER complain about worship again.  Ever.

Pastor Roo picked the most intriguing passage for his series, God Mode Activation – bringing God into everyday life.  In 2 Chron 20, the southern kingdom of Judah finds itself under military threat.  Jehoshaphat, king and commander in chief of Judah’s army proves true to his name (Let Jehovah Decide) and seeks Yahweh’s direction in prayer before going into battle.

Here’s where things get weird.  God decides.  God brings in the big guns to deal with the Moabites – instead of Jehoshaphat calling the shots, Jahaziel gets the nod.  Jahaziel the Choir Director!  Yup.  Do you know how awful the average choir director is at military strategy?  Just think about how awful the average tone-deaf drill Sargent might be at singing.  Somewhere south of that.

God gives Jahaziel the clear directive to station the choir at the front – armed with nothing but their hymnals and dressed in nothing but their best choir robes!  Everyone else (presumably including the army) is to stand behind them.  Jahaziel selects a famous psalm of Asaph as one of the songs the choir (and everyone else) will be singing.  “If this works like Yahweh told me, NONE of you will have to lift a finger.  God will fight this battle for us!”

Evidently, worship must mean something vastly different to Yahweh, than it does to us.  Humans get in trouble when we pretend to know more about God than he’s told us.  No one today would put something like this on a list of good reasons to worship God.  Most today bicker about whether or not we like the music, whether or not we like the worship leader’s style, or whether it “moves us” emotionally/spiritually.  We’re incessant consumers – especially of over-produced worship experiences.

I guarantee you NO ONE in Jahaziel’s audience that day gave a thought about the play list, the instruments, the lyrics, or how freakin long they had to stand and sing.  “Yahweh has asked us to honor him this way.  Worship means we invite Yahweh’s saving presence among us as we face our enemy.”   That’s it.  Turns out that was enough.  That was what was so important to Yahweh.

The narrative goes on to describe how Yahweh smote the ruin of Judah’s enemies that day.  Right in front of their eyes.  Right in the middle of the first worship set.  Maybe if we could figure out why worship is so important to him today, he’d show up and do the same.

I must say it felt great to prepare a message and preach it.  I haven’t had the chance to teach to a crowd since July of 2016.  Here’s the whole ugly mess of notes I used for the sake of my most avid readers.

June has been a great month for MPD!   Thanks to a number of people jumping on board who I connected with back in March and April I’m now 46% funded (piktochart).  I’m so encouraged with the progress.  Among my early backers here are some of the champions God is sending me:

As this list grows, I’m excited to think about the team of people behind what I’m being called to.  Out of love for the Perrys, out of love for IV or love for the university, people are giving to my work.  I’m amazed that I get to be an intermediary between God’s people and such a strategic mission field.  If you are reading this and you are one of those on my list, I’m so grateful for you helping me move from where I started in March, toward being fully resourced and ready to go.  Thank you so much. 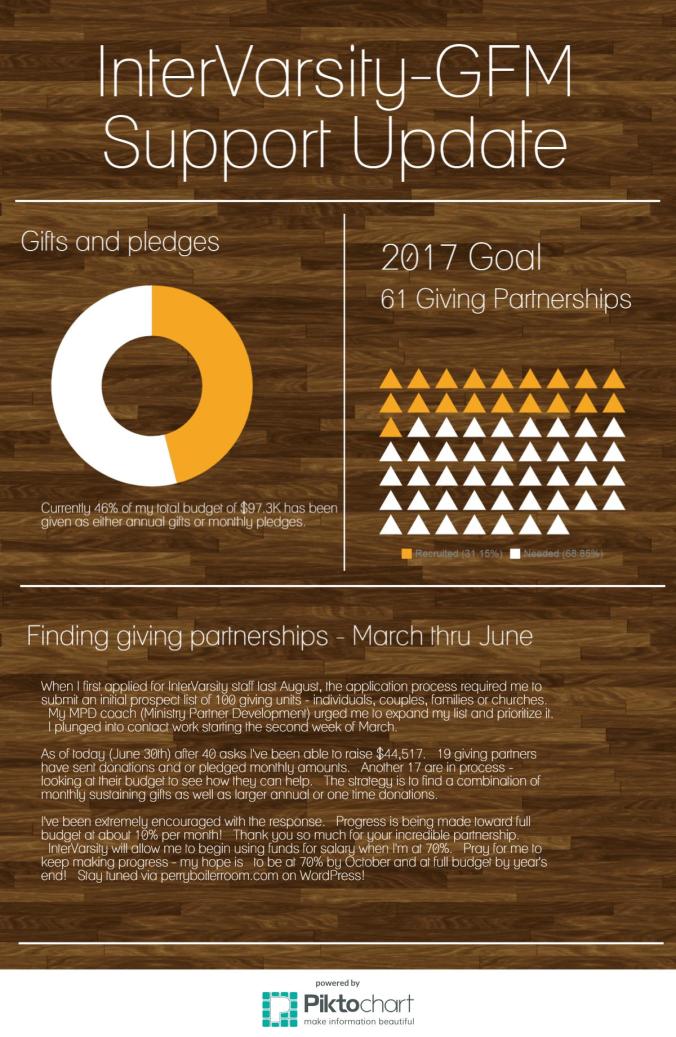 (text at the bottom of the chart):

When I first applied for InterVarsity staff last August, the application process required me to submit an initial prospect list of 100 giving units – individuals, couples, families or churches.  My MPD coach (Ministry Partner Development) urged me to expand my list and prioritize it.  I plunged into contact work starting the second week of March.

As of today (June 30th) after 40 asks I’ve been able to raise $44,517.  19 giving partners have sent donations and or pledged monthly amounts.  Another 17 are in process – looking at their budget to see how they can help.  The strategy is to find a combination of monthly sustaining gifts as well as larger annual or one time donations.

I’ve been extremely encouraged with the response.  Progress is being made toward full budget at about 10% per month!  Thank you so much for your incredible partnership.  InterVarsity will allow me to begin using funds for salary when I’m at 70%.  Pray for me to keep making progress – my hope is  to be at 70% by October and at full budget by year’s end!  Stay tuned via perryboilerroom.com on WordPress!